How To Solve The Wild Horse 'Problem' 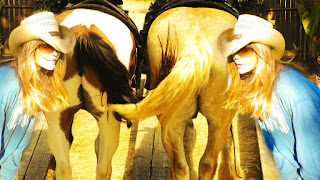 The wild horses are federally protected by the Wild and Free-Roaming Horses and Burros Act of 1971, managed by the Bureau of Land Management (BLM), and graze on tax paid land. This bill was later amended to rid the horses so the land could be used for government business. In 2004, an amendment called the Burn Rider Act allowed round-ups to rid them. Their loopholes for these amendments are usually false claims, like wild horses are "feral" and basically a pest on the land, despite recent news that fossils of horses were found in Wyoming, making horses more native than most animals in America.

The BLM also claims wild horses were overpopulating, when in fact they take less than one percent of the land and gradually the herds are getting smaller. It is actually cattle that takes up most of the land (90 percent), and which are not native to the environment. Cattle and horses have always co-existed. But now the BLM wants all the land cleared, including the cattle, so they told ranchers to sue them in order to legally cull horse herds from the land, letting horse advocates blame the ranchers.

Indeed, in the BLM's own words, there is ten times more land available than needed per animal. Still, as of August, the BLM predicts "excess" horses will eat grass and cause weeds to grow on federal land. The BLM contracts two agencies to get "scientific" data on the horses. Since both agencies list their priority as using federal land for profitable government business, their research is biased against the horses.

The first agency, USGS Fort Collins Science Center (FORT) is paid by many government agencies and policymaking groups to generate evidence to back the client's desired policy. FORT does wild horse population and fertility control studies for the BLM. These studies are used to say it is right to get rid of wild animals in order to expand profitable government businesses, like solar and wind power.

The other agency, the USDA-Animal and Plant Health Inspection Service (APHIS) says it “provid[es] wildlife damage management assistance to protect agriculture, natural resources, property and health and safety," meaning the BLM pays APHIS to show them how to get rid of wild horses. There is no direct public control of APHIS, and no clear mention of their role on BLM web pages on horse roundups.

The only way to stop this is not to complain to the BLM, who was a part of the deal and just taking orders, but instead to complain to your elected representatives that were part of the legislation that made it possible to get rid of our federally protected wild horses. Congressional reps may not like animals, but they need your vote. Tell them to use our taxes to protect our horses, not try to get rid of them. And stop all horses, domestic and wild horses from horse slaughter.

Sadly, horse slaughter has and will always be legal until we pass the anti horse slaughter bill, named this year the Safeguard Act (read it here). This bans horse slaughter permanently, as well as the transport to other countries for horse slaughter. It's been sitting in Congress for 11 years without passing, because most people don't know about it. There are temporary bans on horse slaughter. For example, this year we have an annual ban that cuts USDA funding to inspect horse slaughter plants. The slaughter of wild and domesticated horses is a big business that the government wastes taxes for overseas profit. If this bill passed, it would be almost impossible to get rid of the wild horses in large amounts from slaughters' kill buyers.