We are spokespersons for Stray Cat Alliance (SCA), against the Hayden Law Repeal.

Governor  Jerry Brown wants to revoke the Hayden Law for shelter pets in California which currently gives 4-6 days to allow owners to find their lost pets, injured animals to relieve donated medical attention or for fostering or adoption opportunity.   Gov. Jerry Brown wants to cut funds off by eliminating the wait period and killing the pets within only a 72 hour waiting period. This will create mass killings at shelters. THIS IS NOT AN OPTION! Killing has only opened the window for breeders, creating more discarded pets that are dumped at shelters.

As SCA points out, it actually saves money to implement a spay/neuter program.  For instance, to house, euthanize and dispose a pet, it's $250, whereas to simply fix the pet, it is less than $50.

Jerry Brown's solution is not only unethical and uncompassionate, it also won't solve the problem of pet population.  Killing never has been an answer, just an excuse for breeders to continue to over-breed.

It is far cheaper and more cost effective to implement a spay/neuter program.
Petition to urge Gov Jerry Brown to reconsider the Hayden Law Repeal.


Add one more victory for animals to the list!

Recently, we shared the news that Atlantic City Steel Pier planned to reopen the diving horse shows that were part of the pier from the 1920′s through the 70′s. Owner Anthony Catanoso planned for the events to be part of the big additions going into the location this year and to host the first shows Memorial Day Weekend.

Barbi Twins Valentine's Day Message: Save the Horses!
ExtraTV, Stars Give Back, Feb 14, 2012

Repost by www.stillisstillmoving.com - Inspired by the Wonderful Willie Nelson

Todays War Horse: The War On Horses By The Barbi Twins, Global Grind

The Barbi Twins speak out about variouis subjects around horse slaughter such as the Bureau of Land Management (BLM), the lack of USDA laws to protect horses, the economic myths that go with the horse meat trade, the sad truths around which horses go to the slaughter houses and what the individual can do to prevent cruelty to these beautiful animals beginning with supporting bills like the American Horse Slaughter Prevention Act .
Posted by Barbi Twins, Shane and Sia -- at 9:09 PM No comments:
Labels: * Editorials, * Media, Global Grind, Horses 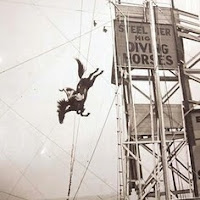 "The diving horse events were stopped in the 1970′s with a brief return in the 90′s, but now Steel Pier President Anthony Catanoso plans to reopen the ridiculous and cruel shows by this summer. If you’re wondering what these events are all about – riders mount horses and ride them up a 40 foot pier and then plunge into the 12ft of water below. Yes, seriously.".....

by The Barbi Twins

Horses are as symbolic as the country they built, America. It is a shame we don’t give them the respect they have earned. For centuries, horses shed their blood to give their service to us. It says a lot when a country has better laws for its flag (that doesn’t have a spine or feel pain), then it does for the horses. Horse slaughter and the wild-horse round ups have been the buzz in the media recently. Here are the common questions and facts about horse slaughter and wild horse round-up controversies.


Why is there an uproar about horses being slaughtered or abused more than other livestock animals?

Horses weren’t bred for human consumption; they were bred and domesticated to be companion animals like a dog or cat. They also helped build our country by working the farms, providing transport and even risking their lives in our battles.  In 1971, Congress voted to protect our wild horses with a special a special law.  They tasked the Bureau of Land Management (BLM) with the responsibility.  Sadly, the BLM was the very agency that had been killing the horses they were asked to protect.


Does horse slaughter help our economy?

Actually, American tax dollars are used to support these foreign owned slaughter houses.  We are paying to provide inspections on meat that goes overseas. This is a big government merging with big business for profit. They hide this greed in the disguise of compassion by insisting slaughter is humane. The ringleader of pro-slaughter advocates recites her facts (propaganda) from an inconsistent and inaccurate GAO (Government Accounting Office) report.  Horse slaughter is a good profit business for foreign owned companies, as horsemeat goes for as much as $40/lb.


Common Confusion… If Congress unanimously voted in 1971 for the BLM (Bureau of Land Management) to be the government agency that protects wild horses, then why does the BLM insist on deadly round-ups? They end up harming the horses and not protecting them and all with tax payers’ money?


What tax payers didn’t know is that the BLM is made up of cattlemen, not horse advocates. The BLM was originally behind eradicating the horses.  They have always wanted to replace wild horses with cattle on the horses land. So why did the government put the BLM in charge of “protecting” the wild horses? Profit disguised as compassion once again by our government merging with big business and making a worse monopoly which leaves the tax payers left with the bill! The wild horses are slowly going extinct. There were 2,000,000 in 1900 and today we can only approximate to 20,000 in 10 western states. The cattle and oil rigs are now replacing the horses.


What is inhumane about slaughter and wild horse round-ups?

Both slaughter and wild horse round-ups are blatant animal cruelty. The helicopter round-ups spook the horses so they end up badly injured or trampled to death. Many times pregnant horses abort foals in these stampedes.  The remaining horses usually die from extreme neglect (hunger, thirst, overcrowding) in the inhumane holding pens. Ironically, this was the very excuse the BLM used to round-up the horses in the first place! Then the horses may be “adopted” by 3rd party kill buyers for slaughter even though it is illegal to slaughter a wild horse. The loading and transport of horses is also animal abuse. Any horse expert can tell you it’s harder on a horse than other livestock, whether it’s in the next city or across the border. Transporters stuff the horses in trailers way to small, without water, food or rest. This is pure brutality as many transporters admit.

One thing is for sure, slaughter is slaughter, and whether it’s done on US soil or foreign soil, it is animal abuse and cruelty. Horses brains are further back in the head which makes it harder to find, thus making shooting or killing the horses much more difficult than any other livestock. Horses sometimes have to be shot three to five times and throats slit to prevent screaming. There is proof that while carving into the horses many are still conscious. There is nothing humane about slaughter and it’s impossible to enforce it, as Dr. Temple Grandin, humane slaughter expert, even admitted. There are very few USDA laws to protect the horses and they are rarely enforced. “Humane slaughter” is an oxymoron.


Why should everyone care about horse slaughter bill passing?

For those who don’t care about horses, you should care your taxes are wasted on this, much more than the myth that this creates jobs. For those who were told that horse meat is better for you, they haven’t heard about the toxic warnings, dangerous drugs and medicines used in the horse industry. These are also hidden from the commercial market. Horses were not bred for eating!


What about the unwanted or abandoned horses?

Well just like with dogs and cats, it becomes the owner’s responsibility once we outlaw slaughter. This is a whole different animal issue, which is not solved with animal cruelty of horse slaughter. Moreover, the horse slaughter business only wants healthy horses.  A USDA study said that 92% of slaughter horses are in good condition.  Many victims of horse theft or horse fraud complain they have found that their horses had gone to slaughter. This is because kill buyers seek healthy, young horses in order to sell better quality meat. Many of the so-called abandoned horses were ironically from the horse killers themselves leaving behind the sickly horses at the borders that weren’t good enough for horsemeat.


Who is the blame for the abandoned horses?

The abandoned horses are not the problem; it is only a decoy from the truth. The real problem comes from the breeders and the breeder supporters who encourage incentives for the breeding of as many horses as possible. This is specifically true of Quarter horse breeders who are using artificial insemination. They promote slaughter as a dumping ground which opens a huge window of business for more breeding. By the way, most of the “abandoned” horses are Quarter horses which tell you right there what “their” agenda is!

First of all get the facts straight and don’t buy into the propaganda being spewed by pro-slaughter pitches or the clever BLM claims disguised as facts. Remember the BLM is just cattlemen with an agenda to replace the horses with cattle, gold or an oil pipeline. Then spread this factual information.

Right now there is a perfect “one stop solution” to end this all….a bill before the US Congress that stops all horse slaughter  in the US and stops all transport of American horses for slaughter to any foreign country. This bill is called the American Horse Slaughter Prevention Act. This bill was originally drafted in 2001 and introduced to Congress in 2002 by the Animal Welfare Institute (AWI), who has led this national effort for ten years. Chris Heyde, from AWI, worked tirelessly on state laws to shut down the three U.S. slaughter houses in 2007; two in Texas and one in Illinois. However, the ultimate goal is passage of a federal bill that will prevent any new plants from opening and will prevent American horses from being shipped to Mexico or Canada for slaughter.

Now the horses need your help. We have the power to end this permanently. All you have to do is call the Capitol switchboard at (202) 224-3121 and ask to be connected to your Senators and Representative.  Then tell them you are pro-horse and urge them to help pass the American Horse Slaughter Prevention Act (H.R. 2966 and S. 1176) today!  You can find out who your legislators are by visiting AWI’s Compassion Index at www.compassionindex.org .  Even more effective than a call, you can go to your elected officials’ local town hall and urge them to support these bills face to face.  Because this year is election year, your representatives are eager to hear what you want. We have the power with our vote, but also because it is election year. Congress closes early this year, so we have to act quickly.